Psyllium husks are an amazing near zero net carb ingredient that anyone on a keto or low carb diet would benefit from adding it to their daily diet. Psyllium husk benefits these dieters by acting as great substitute in baking, and aiding weight loss too.

What is Psyllium Husk?

Psyllium Husk is harvested from the Plantago Ovato plant. The seeds of this plant are a very high source of soluble fiber.

Psyllium is produced for its mucilage content. This is a clear gelling agent which comes from the seed coat. By grinding or milling the outer layer of seed the white fibrous material (the mucilage) is produced. This is the product that is referred to as psyllium husk.

The psyllium husk is hydrophillic which means it is able to bind with water and from a clear, colorless gel which can increase its volume by as much as 10%

This makes it great for use as a thickener in baking and cooking. 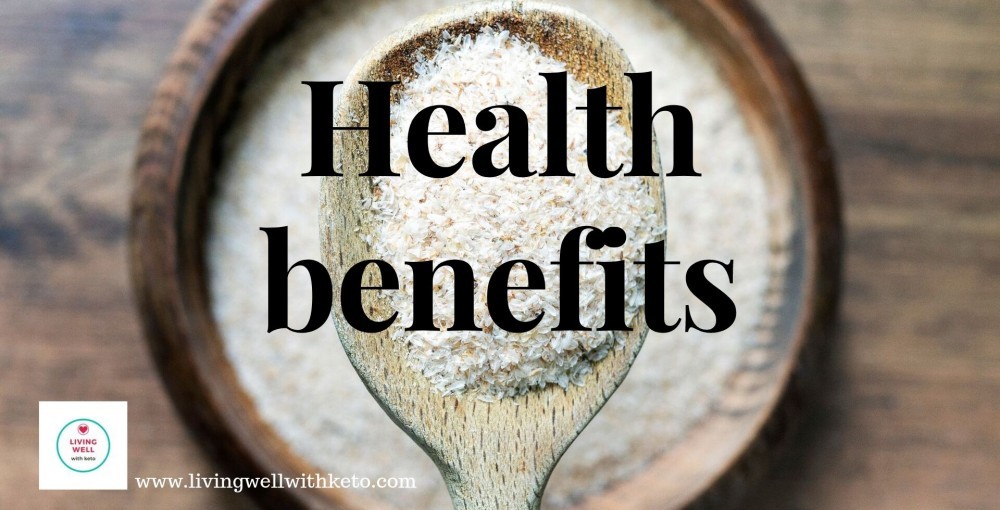 Due to its fiber, one of the main uses for Pyllium Husk is as a treatment for constipation. It is the main ingredient in many medicines used for this purpose.

It is recommended that women take 21-25g fiber per day and men take 30 -38g, so just a tablespoon of psyllium husk can provide almost a quarter of the recommended amount.

All this fiber is great for in improving the function of your digestive system. It helps with the contraction of your stomach, which will aid enable the passage of food through your intestines, and increase bowel mobility.

Take a glass of water and psyllium daily for better digestion naturally. The best time to take this solution is immediately after eating a meal.

There have also been claims that Psyllium Husk is beneficial for reducing cholesterol and for managing type two diabetes.

It has also been linked to aiding in the regulation of blood/glucose levels, with this study supporting those claims.

In this study it was found that patients better tolerated their diabetes medication (metformin). They showed much better gastric tolerance of metformin following ingestion of psyllium husk.

A further study showed a reduction in the “bad” LDL cholesterol, and an increase in good cholesterol after taking psyllium three times a day before meals for 12 weeks (1)

However, for most people its greatest use is for adding fiber to a diet. Just one tablespoon of the husk powder contains 5g of fiber which is almost a quarter of the recommended daily allowance.

As an aid to weight loss a teaspoon or two of the powder is added to a glass of water and drunk immediately, before it has a chance to form a gel. Once the gel forms in the stomach, this helps you to feel full, and can minimize the risk of eating too much. It can also help to reduce your appetite, and minimize the times that you’re tempted to snack between meals.

Psyllium husks are a great way for keto dieters to reach their ideal fiber intake, which is sometimes difficult when keeping to their keto macros.

If you are on medication, there is a chance the psyllium husk could interfere with the absorption of your medication.

For this reason, you should seek the advice of your medical provider before using this product.

Due to the fact that Psyllium Husk is 100% fiber and almost zero net carbs, it is a great addition to any keto kitchen. It is the go to fiber supplement for many low carb dieters.

It can be used as a thickener, or to make breads or pizza bases as it provides the volume and lightness needed. It can also be used to increase the moisture content in baked goods.

One tablespoon of Psyllium contains:

How to use it in a keto diet

Start with a small amount, and increase as you get used to it. You’ll need to take plenty of water with the husk to prevent gas or stomach swelling.

Taken with water it can help to reduce your appetite, by turning to a gel in your stomach.

Taken first thing in the morning it will help to get you through to lunchtime if you are intermittent fasting, and want to miss breakfast.

Remember that this is often used as a laxative, so you want to start slowly and see how you tolerate it before working up to a full tablespoon full or two.

Some people find it difficult to eat enough fiber on the keto diet, and some of the more fibrous veggies are also high in carbs.

This is where using Psyllium as a supplement can help ensure that you’re getting enough fiber to meet your health goals.

If you’re using psyllium husk to reach your dietary fiber needs, the easiest way to do this is to take it in pill form .

Follow the directions on the bottle, and make sure you get enough to drink throughout the day.

It’s possible to use the powder for the same effect although it’s a bit more fiddly to make, and the taste isn’t great. However, it will work just as well.

This keto psyllium pizza crust will give you an idea of the amazing fiber filled foods you can make with this ingredient.

Mix together the almond flour, psyllium husk, garlic powder, Italian seasoning and salt to taste, then add everything else.

Roll to about 1/4 inch/1cm thick and bake on lined baking sheet for 10 minutes.

Remove from the oven and add whatever you’d like on your pizza. Bake for another 5 minutes or until cheese is bubbling.

As an egg substitute

Psyllium husk can be used in baking as an egg substitute.

Substitute 1 teaspoon of psyllium husk for 1 egg with 1 tablespoon of warm water.

It will thicken in much the same way as chia seeds.

Once added to water, allow it to form a gel and then add to your recipe.

What type of Psyllium Husk is best?

It’s a matter of personal choice as to which sort of psyllium Husk you buy.

Psyllium husk is available online in both powder or whole husk form.

The powder is normally used in cooking while the whole husk is often used as a treatment for constipation.

Make sure that there are no added sugars, and is also certified gluten free. Organic is always better.

How to add Psyllium husk to your everyday diet

The normal amount to take each day is 2 teaspoons, twice a day mixed with at least 8oz/ 250g of liquid.

Make sure you drink sufficient water for the rest of the day.

There is no particular taste but personally I prefer it with a little squeeze of orange or lemon juice. Drink it as soon as you have mixed it with water.

The gel should form once its in your stomach, not in the glass. It will do no harm, but it is more pleasant to drink it quickly.

Where to get Psyllium

Psyllium husk is available in many natural health stores, and there is a wide choice online.

Weigh And Track All Your Macros

Disclaimer: The content of this site is not intended to be a substitute for professional medical advice, diagnosis, or treatment. It is not a substitute for a medical exam, nor does it replace the need for services or counsel provided by medical professionals.
livingwellwithketo.com is a participant in the Amazon Services LLC Associates Program, an affiliate advertising program designed to provide a means for website owners to earn advertising fees by advertising and linking to Amazon(.com, .co.uk, .ca etc) and any other website that may be affiliated with Amazon Service LLC Associates Program.
Affiliate Disclosure: When you buy something from this website, I may receive an affiliate commission. My reviews are based on my OWN personal experience and research. These are my opinions and are not representative of the companies that create these products. I never recommend poor quality products, or create false reviews to make sales. It is my intention to explain products so you can make informed decisions on which ones suit your needs best.
Scroll back to top