Over 30 million people in the U.S. have diabetes, and the majority of them have type 2 diabetes. (1) In the UK, it is estimated by Diabetes UK that, if nothing changes, over 5 million people will have this condition by 2025. Everywhere the rates of type two diabetes are rising, causing enormous health problems and suffering. Here we are going to look at the evidence of a link between type two diabetes and diet.

While many cases of type 2 diabetes can be prevented, it remains for adults the leading cause of diabetes-related complications such as blindness, non-traumatic amputations, and chronic kidney failure.

What is type two diabetes?

Type 2 diabetes is a condition which occurs when the body can no longer correctly use the insulin that it produces.

This is also referred to as insulin resistance.

Normally, when we eat, our food is converted into glucose to be used for energy.

Insulin is produced which enables this glucose to leave the blood and enter our cells to be absorbed by the body.

When a person has type 2 diabetes, their body cannot respond correctly to this insulin, so the body reacts by initially producing more.

However, there comes a time when the body can no longer produce enough insulin and so the glucose cannot enter the cells.

Instead, the glucose stays in the blood and blood/sugar levels rise dangerously.

The result is very serious damage to multiple parts of the entire body.

Who gets type two diabetes?

Almost everyone is aware that obesity is by far the biggest cause of type two diabetes.

Having a BMI of over 30 increases the risk of developing diabetes by a massive 80%.

There is also evidence that genetics plays a part. If either parent has the condition, then there is an increased risk of you developing it too.

Other risk factors include smoking, being of South Asian or African-Caribbean descent, having raised blood pressure and raised cholesterol levels.

Polysystic ovarian syndrome, which is a disorder of hormone balance is another risk factor, as is being older than 45.

However, with obesity being the biggest cause, the spotlight is now being shone on the type of diet which may cause or prevent this major health issue. 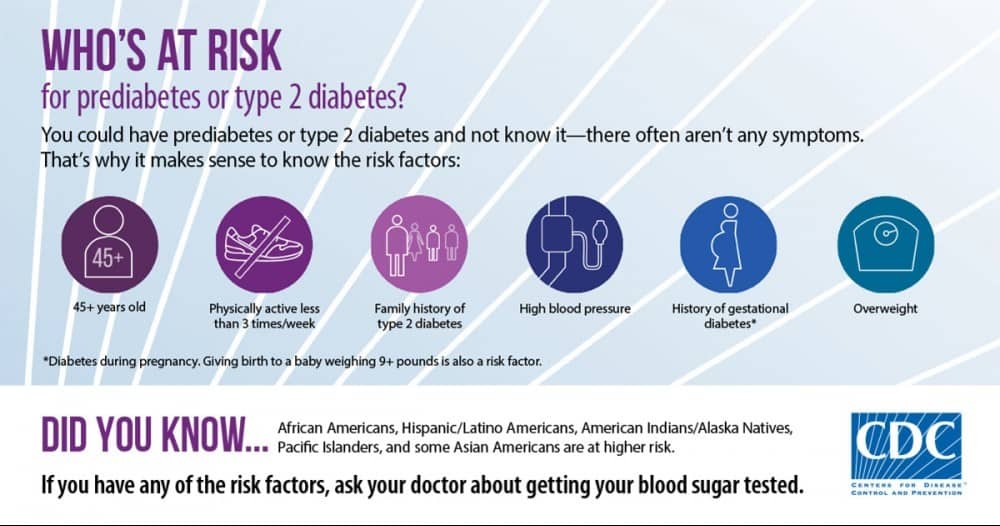 One study at Harvard University which was published in Science suggested that the cells of an overweight person become stressed.

Inside your cells is a membrane called the endoplasmic reticulum.

When this becomes stressed by trying to process too many nutrients it sends a signal to the cell to turn down the insulin receptors on its surface.

This becomes insulin resistance, and gives rise to the very high blood/sugar levels which cause type 2 diabetes.

There is some evidence that lean muscle mass is important in helping to prevent both insulin resistance and type two diabetes.

Which foods are implicated in the development of type two diabetes? 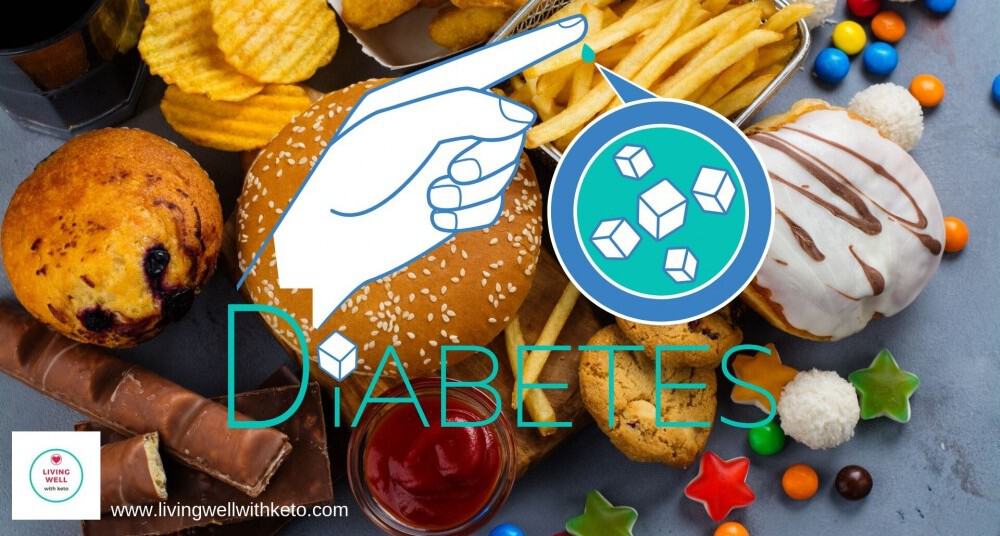 Your body has differing hormonal responses to different types of food. Some foods are much more likely to spike blood sugar that others.

Carbohydrates are the macro nutrients that cause the biggest and quickest rise in blood sugar levels. Proteins cause a moderate rise.

There is no rise in blood / sugar levels after eating fats.

Simple carbs in particular can be a problem for the body, as they are able to affect blood/sugar levels more quickly than any other food group.

When a simple carbohydrate is eaten, blood sugar levels rapidly increase and the body produces insulin in response to this.

If someone is eating a diet heavy in simple carbs, which is very common in the standard western diet, the body has to repeatedly send insulin out to deal with the sugar.

This does two things:

Insulin, which is the hormone which signals the body to store glucose as fat, attempts to send as much glucose to the fat cells as it can. This in time will lead to weight gain.

The cells, as already said, become stressed with too many nutrients and signal the cell walls to reduce insulin receptors.

By eating far too many simple carbs, and far too often, the chances of becoming insulin resistant and developing type two diabetes increase significantly.

It is important both for the prevention of and the management of type two diabetes to control the amount of simple carbs eaten.

Carbohydrate heavy foods come in two main groups, and while both need to be reduced, the simple carbs are more sugar-spiking than complex carbs which contain fiber and starch which helps to reduce the speed of the insulin response.

Sugar is the number one culprit, being 100% carb and implicated in many diseases and health issues and not just in type two diabetes.

These are other high carb foods of the “simple carb” variety.

A very general rule of thumb would be to avoid the simple carbohydrates altogether.

They are often foods of very limited nutritional value and contain few if any vitamins or minerals.

Also be aware that many “diet” foods have had the fat removed only for it to be replaced by sugar.

Often called fructose, corn syrup or dextrose. There are more than 50 different names used by the food industry to describe sugar.

Complex carbohydrates contain fiber, a valuable addition to your diet, and should not be avoided. However, we need nothing like the 200g-300g of carbs each day which is now consumed on an average western diet.

The starches in complex carbs also serve to slow down the sugar/insulin surge more than simple carbs which do not contain starch.

So, are carbs implicated in the development of type 2 diabetes?

Way back in 1977 the food pyramid was first introduced as a guide to healthy eating.

It suggested that we should all base our diets on carbs, an astonishing 6 -11 servings each day was suggested as being “healthy”

Once you know that carbs cause an insulin reaction in our bodies, it’s difficult to see how eating such a carb heavy diet could have ever have been thought of as healthy. 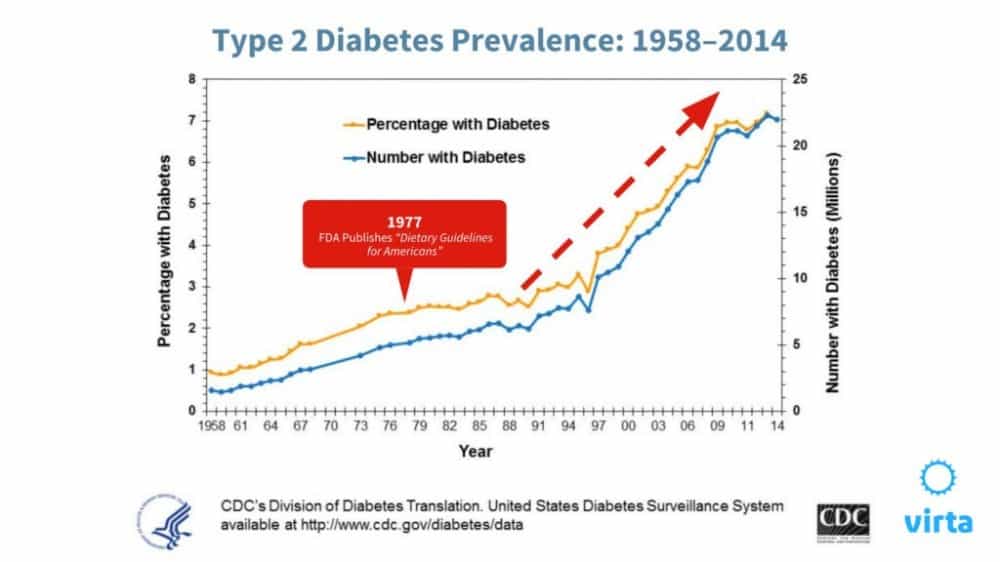 It’s important to remember that we need a certain amount of carbohydrates in our diet.

It would be both difficult and unhealthy to attempt to omit all carbs.

However, a low carb diet has been shown to help people to regulate their blood sugar levels and a study conducted at Bispebjerg Hospital in collaboration with, among other partners, Aarhus University and the Department of Nutrition, Exercise and Sports at the University of Copenhagen appears to support this.

The authors of the study determined  that “Patients with type 2 diabetes improve their ability to regulate their blood sugar levels if they eat food with a reduced carbohydrate content and an increased share of protein and fat.”

This study deliberately sought to take weight-loss out of the picture and so the subjects ate protein and fats in sufficient amounts to maintain their body weight.

The scientists felt that other studies into the low carb- diabetes link muddied the waters somewhat by putting the subjects on a low carb diet which also caused weight loss.

However, there are some studies that have stated that they have not found a significant link between the two.

When scientific evidence, the food pyramid and a growing amount of anecdotal evidence is taken into account, there seems to be a strong link between a too carb heavy diet and type two diabetes.

While there is most definitely a link between eating a carb heavy diet and developing diabetes it’s important to note that this does not conclude that carb heavy diets cause the condition.

Too many carbs cause obesity (stop counting calories lose weight and gain control).

Obesity and type two diabetes seem to go hand-in-hand  but the conclusion amongst scientists is unclear.

While some feel strongly that carb heavy diets do cause diabetes, it’s possible that the pathway to type two is actually too many carbs – weight gain – type two diabetes.

In my opinion, the exact mechanism is less important that the fact that in either case, consuming too many carbs can have the end result of you developing a very serious health condition.

While the science is still not conclusive, there does seem to be a lot of evidence, and certainly enough evidence to give serious consideration to trying a low carb diet for yourself.

Dr David Unwin wrote in a UK national paper low carb diet as a way of reversing diabetes  of his success in helping his patients to overcome type two diabetes through diet alone.

He states “By switching to this approach, 40 per cent of my patients actually reversed their type 2 diabetes so they no longer need medication — their blood pressure, cholesterol and liver function have also improved.

Thanks to this work, in 2016 I was named NHS Innovator of the Year and my approach is now being taught to GPs across the country through the Royal College of General Practitioners — I even met the Health Secretary Matt Hancock to discuss low carb for type 2 diabetes.”

That’s more than enough evidence for me.

Disclaimer: The information on this site is not medical advice, please consult your doctor before making diet or lifestyle changes. This is particularly important if you have a disease that can be modified by the keto diet such as diabetes, epilepsy or cancer, or if you’re on medication

Don’t guess what you’re eating: weigh and track your macros

If you’re interested in keeping your immune system in great shape, you will know that fermented foods make a great choice. The Health Benefits of […]

We’re all facing one of mankind’s biggest challenges. Every one of us needs to maintain our optimal heath in the face of this corona virus […]

If you’re experiencing some issues with your new keto diet, Problems with the keto diet (quick guide) will soon have you back on the healthy […]

Can you complete a 72-hour fast for an immune system reset? The science says you can. There is a lot of evidence that says fasts […]

The keto diet is going from strength to strength. Each day thousands of people decide to use the keto system to reach their weight loss […]

Looking for the fastest way to get into Ketosis -guaranteed? If you don’t like to hang around when starting something new, this is going to […]

Wheat is everywhere: In the obvious things like bread and pastries and pies. In cookies and cakes and pasta. It’s also hidden in sauces, ready […]

Thousands are huge fans of the keto diet and the amazing benefits it’s bought to their lives. They’ve found a way to control their weight […]

The keto diet is famous for its weight loss ability. Equally well-known are the numerous health benefits of this ultra low carb way of eating. […]

Low carb eating is becoming a superstar. Ever increasing numbers of people are turning to some form of low carb eating to reach their weight […]

Do you think the keto diet will be expensive? Here’s a quick guide to cheap keto meals and the 8 ways to eat keto for less. […]

Sometimes size matters. When a product hits the best-seller list, with thousands of rave reviews from fans, it’s probably because that product really is great. […]

When you first start the keto diet, your aim will be to get into ketosis, and you’ll be keen to know what your ketone level […]

Are you following the keto diet and wondering “What are net carbs and how to calculate them?” Learn this easy way to convert total carbs […]

You’ve searched for “Why Am I Not Losing Weight : Keto diet”. Here you will discover the main causes for a lack of weight loss […]

Would you like to know more about how to eat and lose weight? Here’s a clue: the secret is to eat in tune with your […]