Is Wheat Bad For You (And Your Brain) 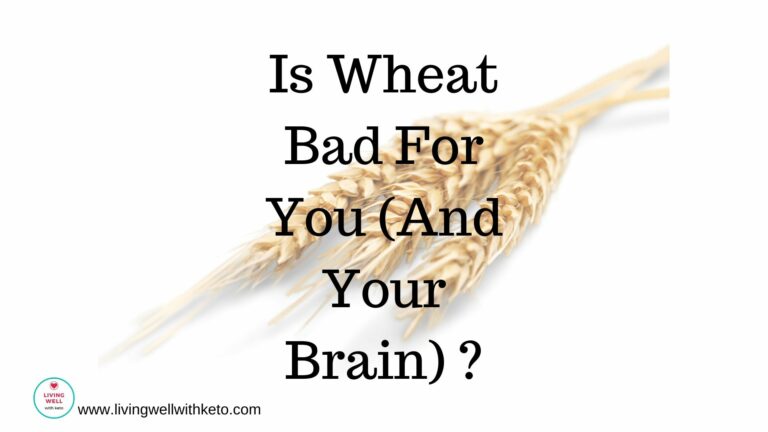 Wheat is everywhere: In the obvious things like bread and pastries and pies. In cookies and cakes and pasta. It’s also hidden in sauces, ready meals and beer. But is it healthy to eat so much wheat? Is wheat bad for you (and your brain) ?

Wheat is so heavily used in the food industry, that unless we make a concerted effort to avoid it, we will be eating it in vast quantities every single day.

The national consumption of wheat has made a stratospheric jump over the past 40 years.

The US Wheat Associates state:

In the USA, people are eating much more of everything than they used to. The average daily consumption of all foods is now 23% higher than it was in 1970.

In other words, the average person in America consumes 122 pounds (55.3Kg) of grains every year.

So, now more than ever before we ought to be asking if Wheat is bad for you and your brain.

Its certain that there is no way that we should be eating wheat at this level. Especially without thinking about what it’s doing to us both physically and cognitively.

One of the reasons for this explosion in wheat consumption is that wheat is hidden in countless foods. It’s not enough to think only of the obvious sources of wheat.

We are all consuming a lot more wheat than we are aware of.

Wheat is hiding in all these foods:

A wheat ingredient may be “hidden” and listed as:

To eliminate Wheat you’d have to carefully read the nutritional labels on every food you eat.

So, should we worry?

Is wheat bad for you (and your brain)?

There is growing evidence that wheat is not good for you. For a start, it’s highly addictive.

Many people who are hooked on bread and pasta will testify that giving up wheat is difficult to say the least.

A few days without grain and they’re longing for a wheat fix with all the pull of any other sort of addiction.

They suffer withdrawal symptoms which include acute cravings, headaches and depression.

This is a real issue and should never be overlooked or minimized.

If this is you, you’ll need to take your addiction seriously and like all addicts, you will need to guard against ever consuming wheat.

One cookie may be all it takes to set you off on a binge.

The type of binge that will play havoc with your body and your mind and here’s why:

Most people are aware that celiacs need to avoid gluten or pay the price.

However, what is less well-known is the fact that gluten is a problem for us all.

We simply do not have the ability to properly digest gluten.

Alessio Fasano, the Medical Director for The University of Maryland’s Center for Celiac Research, tells us that no one can properly digest gluten:

“We do not have the enzymes to break it down,” he said in a recent interview with TenderFoodie.

Gluten consumption creates an immunogenic response which increases intestinal permeability, thus triggering systemic inflammation by the immune system — which can lead to any number of autoimmune diseases.

These include celiac, rheumatoid arthritis, irritable bowel syndrome and many neurodegenerative diseases.

This process takes place even in people who do not have celiac disease.

The chances are it’s taking place inside you, right now.

If you’re not too sure why you should care about inflammation, read here. The amount of damage done by chronic inflammation cannot be overstated.

Further, gluten is a composite of the proteins gliadin and glutenin. Gliadin also has some fairly unpleasant effects on us when its eaten.

This study found that gliadin disturbs the intestinal environment and affects metabolic homeostasis in obese mice.

They suggest that gliadin has a detrimental effect of gluten intake even in gluten-tolerant subjects consuming a high-fat diet.

Further, they found that these findings about Gliadin support this idea:

That’s all of us, and we should care about these findings if we’re eating wheat.

This study supported these findings and found that :

Our data support the beneficial effects of gluten-free diets in reducing adiposity gain, inflammation and insulin resistance. The data suggests that diet gluten exclusion should be tested as a new dietary approach to prevent the development of obesity and metabolic disorders.

There is now overwhelming evidence that wheat and in particular, gluten, is harmful to our health, even when we are not gluten intolerant.

What about gluten free wheat? Can we eat that?

Unfortunately, the answer seem to be no.

In addition to gluten, other triggers involved in non celiac gluten sensitive people (NCGS) are the pathogens which have been recently been identified including wheat proteins.

So, apart from gluten, there are other wheat proteins that also cause a lot of unpleasant side effects, and are not good for our health.

Importantly, there is evidence that these side effects include impairment of cognitive function too.

There is a mountain of evidence that wheat is not good for your health. Gluten can trigger inflammation which is implicated as the trigger for multiple health issues.

It seems that there are other proteins in wheat which are equally damaging to health.

Therefor, it is not enough to simply swap to gluten free wheat. The evidence suggests that the whole of the wheat grain is not good for us.

One of the reasons may be that the wheat we eat now is different to the crop that was eaten 40 years ago.

Additionally, we are all eating a lot more wheat than ever before.

This is true even if we are not aware of eating wheat as it is hidden in hundreds of different products.

In the spirit of fairness, it’s true that there are several other studies that suggest that wheat minus gluten is safe to eat, or even beneficial.

However, in my opinion, wheat should be off the table for all of us. Not just for the negative health issues but also because it’s so addictive.

It’s impossible to follow a healthy eating plan when you’re craving a cookie, or a pie or bread.

For me and for countless others, the best way would be to give wheat a miss. We could all do with eating a lot fewer carbohydrates.

So, is wheat bad for you and your brain? The evidence says it is.

It is something we should all be avoiding if we want to live our longest and healthiest life.

What is inflammation in the body?

How many carbohydrates do you need every day?

Previous
The Fastest Way To Get Into Ketosis – Guaranteed.