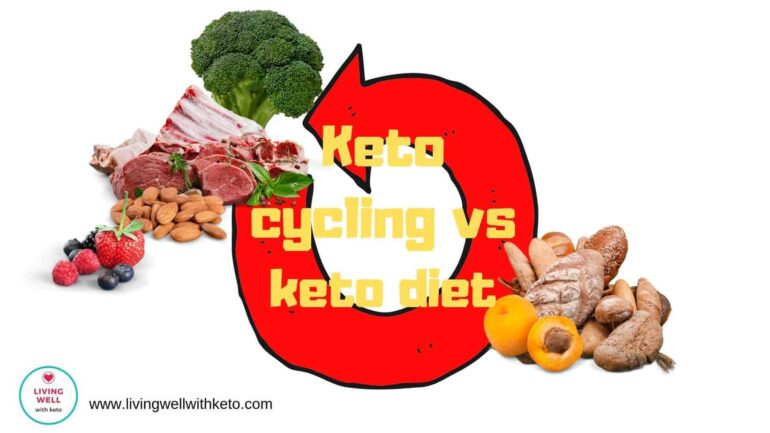 Should you use the keto diet all the time, or is it beneficial to take time out? The Keto Cycle Diet vs Keto Diet examines which method of dieting would work best for you.

The keto diet is a very low carbohydrate, medium protein and high fat diet that enables your body to burn fat for energy.

This process puts you into ketosis, hence the name of the ketogenic diet.

It is normally required that to enter ketosis you need to consume no more than 20 net grams of carbohydrate per day. This is a very effective way of losing weight, but some people find it difficult to sustain for long periods of time.

For this reason, the idea of the Keto Cycle Diet has become popular.

With this method the keto diet is followed for a few days or weeks and then changing to a higher carb allowance.

This is done for a few days before returning to the keto diet.

By doing this, it has been suggested that all the health and weight loss benefits of the keto diet can still be enjoyed while not having to stay on the more restrictive keto diet.

Plus, some people just feel the need to eat a slice of pizza from time to time.

So is this really possible? Equally important, is it healthy?

There are no scientific studies that have compared the keto diet vs keto cycle diet, so I have gathered the available information that there is so far.

Both the method of keto cycling and the outcome have supporters on both sides of the pros and cons.

How to do Keto Cycling

There are various ways championed for how best to go about carb cycling. Some suggest  doing the keto diet for six days in a row and then having a day off.

There are many people on Reddit describing how they have anything from one day to a week as a break from the keto diet and come out of ketosis.

Others balance their carb days depending on their level of activity. If they are doing an intense work out then they will have pasta and bread.

If it is a day of less activity, then they will have extra carbs, but not as many.

There is also some discussion about the type of carbs that should be eaten on days off.

I’m of the opinion that even on carb days, the emphasis should remain on healthy nutritionally dense carbs.

I think the problem here could be that some people are going to feel that it’s OK to eat unhealthy processed carbs because they’ll be back to keto in a few days.

Keto cycling could become a cycle of healthy eating followed by binge eating.

I know the occasional pizza or slice of bread isn’t the end of the known world, but I do think that carb cycling may tempt some people to eat in an unhealthy way, feeling that they can be super strict later.

It has been suggested that carb cycling is great for people that really crave carbs. I think this is probably a very individual thing and you need to know how you are with your cravings.

Some will have a slice of cake and move on relatively easily. For me, it would trigger my sweet tooth and I doubt that I would stop at just one slice!

You need to be honest with yourself here or you will pay the price.

However, if you use your carb days to enjoy some of the healthy carbs that are restricted on the keto diet then I think cycling could be a good option.

For example, you could have some fruit or extra vegetables. Root vegetables are generally too carb heavy for keto, but you could enjoy a baked potato on your day off. There are many healthy choices of carb rich foods to choose from.

Also, you’ll need to remember that being in ketosis will dampen your appetite, so you will need to be prepared for the fact that you may well find yourself very hungry after a carb up day.

A day or two spent eating like a horse won’t do you too many favors.

In other words, whether keto cycling is healthy or not very much depends on the way it is practiced by each individual person.

If the same principles of eating healthy nutritious carbs and no sugar are continued during the “off” days then this may be a great alternative for people who are benefiting from the keto diet but find they want some time away.

What are the benefits/ risks of keto cycling?

There is some concern that long term ketosis can interfere with the proper function of the thyroid, but I have not found any scientific evidence to support this.

There is no science that supports the claim that the keto diet or keto cycling diet harms your thyroid.

There is some suggestion that the keto diet done well (IE nutritionally dense carbs, right amount of protein and fat) can be of some benefit to the thyroid.

One of the main drawbacks of keto cycling, in my opinion would be that fact that you are replenishing your glycogen stores on your off days.

It may take several days on the keto diet to get back into ketosis.

This would mean that its probably not a good idea to swap between keto and non keto days too frequently or there could be every chance that you don’t get back into ketosis at all.

If you are testing your ketones, then I suggest that you give it at least a week in full ketosis before you think about having a carb day or two.

If you try switching between the two more frequently it may mean that even though you are spending time on the keto diet, you will not achieve the full benefits of the diet, which depends on you being in ketosis, and not just low carb.

Normally, I would say that by following the keto diet and keeping to under 20g of carbs per day, you should be able to assume that you’re in ketosis.

However, if you do change between low carb and keto, this may not be so obvious and you would do well to use a keto meter, or keto strips to check that you are in ketosis.

This is one of the best meters on the market, and is one of the very few to be recommended by many leading experts in keto science. It also has a lifetime guarantee.

On the plus side, I think it’s good to be pragmatic here. If you’re finding the keto diet restrictive, it’s probably better to have a few days away from keto in a controlled way.

This could stop you “going off” the diet, and could help you to stay with keto for long enough to reach all your goals.

However, with an absence of real science to help us here, I would recommend that you go with what feels best for you and for your personal situation.

So is it worth trying the keto cycle diet?

I believe that if you have been on the keto diet for some time and are well adapted to fat -burning, then this could be an option for you if you really do need to eat something off the keto food list from time to time

Obviously, if you are following the keto diet for health reasons, you will want to consider if a day or a week out of ketosis is going to be worth it for your health goals.

For those of you who are following the keto diet for weight loss goals, then there really isn’t any evidence that taking a break and having a few carb days is going to do you any harm.

I would advise that you are well fat-burning adapted first though, as you will be asking your body to switch between metabolic states, and you need to be able to do that easily.

So spend at least a few weeks, or better still a month on the regular keto diet before building in your carb days.

If you don’t do this, you may well find that you become tired and stressed on the days you switch back to keto.

You will also run the risk of feeling the effects of the keto flu.

An alternative could be to simply arrange to have the occasional cheat day, and plan this carefully to avoid going wild with the carbs.

Its discussed here keto cheat day and could provide you with a chance to eat that cake without keto cycling in a more formal way.

There is no hard and fast scientific evidence either for or against the keto cycling diet vs the keto diet.

In the absence of real science, it’s reasonable for you to make your own mind up about whether you’d like to try this way of eating or not.

Only you know your exact health and weight loss goals, and you are the person best placed to decide if it’s better for you to stay on the keto diet long term or to make use of the keto cycle diet.

If you are the sort of person who can enjoy an occasional treat without blowing your entire diet, then keto cycling may be just the right fit for you.

Or, you could just have a cheat day, or even just a cheat meal and then move on.

You are the best judge of whether or not this is going to be a good thing for you and your goals.

Next
What Is The Keto Diet About?