Many migraine sufferers have found that both the frequency and intensity of their migraines are reduced with a low carb diet. For this reason we’re delving into the link between keto and migraine.

The keto diet has many amazing health benefits, including its ability to help prevent migraine headaches.

The keto diet has already proved it’s use for many neurological conditions.

The best known is it’s ability to reduce or treat drug resistant epilepsy in children.

There is evidence that the development of both epilepsy and migraine follow some of the same pathways. There appears to be an overlap in the causes of both of these conditions.

Due to these findings, it has turned the attention of many scientists towards the role of diet.

In particular, the use of the keto diet in the prevention and treatment of migraines.

The keto diet has long been known for its ability  to calm inflammation in the brain.

Therefore, it’s reasonable to consider that the consumption of a low carb diet could play a part in the management of migraines.

Migraine is a complex, common and debilitating neurological disorder and affects 17% of women and 8% of men in Europe (1)

In the US 18% of women and 8% of men are affected. Migraine is the 7th leading cause of disability in the world.

That’s a huge amount of suffering and loss of work. There is also evidence that the prevalence of migraine is increasing.

Medication for migraine very often brings little or no relief and can have numerous side effects.

Many of the millions of sufferers around the world have had to live with the condition for most of their lives. They have had limited  benefit from medication of any sort.

For this reason, there have now been several studies which have sought to discover the link between the condition nd diet.

Especially the keto and migraine link.

There is evidence that migraines are a response to cerebral energy deficiency.

Making ketones available for metabolism instead of glucose has shown promise in the prevention of migraines.

The keto diet results in the production of ketones

All the cells of the brain are able to metabolize ketones for energy, and will do so in the absence of sufficient glucose. (2)

A one-month observational study of the keto diet in 96 migraine patients was set up. This waspart of a weight loss program.

It found a reduction of up to 80% in migraine frequency, severity and acute medication use (3)

In this study 18 episodic migraineurs followed a keto diet. They induced a huge 62.5% reduction in their average amount of migraine days.

In this study there were mixed results ranging from a reduction to a total absence of attacks in the subjects.

The authors concluded that ketosis might offer a long-needed relatively side effect free remedy. At least for a proportion of migraine sufferers.

It has been known for a long time that hypoglycemia can trigger a migraine.

The brain is a major user of glucose, and is very vulnerable when there is insufficient glucose.

Problems also occur  when it becomes difficult to use the glucose that is available.

A recent study showed that people that suffered migraines were more likely than others to have a lower rate of glucose uptake in the cells of the brain. (4)

This agrees with the idea that migraines will occur when the brain is unable to metabolize sufficient glucose for its energy needs.

When following the keto diet, the resulting ketones are able to cross the blood/brain barrier and be used as an alternative source of fuel by the brain.

The study, published in the journal Nutrients, observed 35 subjects who were all overweight and migraine sufferers.

They were split into two groups – The first group followed the keto diet and the other ate normal, non keto meals.

Meals were prepared for the participants that had the same amount of fat and calories, but different ratios of protein and carbohydrates.

Both groups lost more or less the same amount of weight but the keto group had an extra benefit.

Nearly 75 per cent of those who had followed the ketogenic diet found that their migraines had greatly reduced.

Only nine per cent on the high-carb diet experienced the same.

Di Lorenzo concluded that the ketogenic lifestyle may prevent migraines.

Again, this appeared to be due to the brain being able to metabolize ketones for energy, instead of the more usual glycose.

Reduction of Inflammation and migraine

The keto diet is well-known for its ability to reduce inflammation.

This leads to numerous health benefits.

Further, it  is known to reduce the risk of developing several neurodegenerative diseases such as Alzheimer’s disease and Parkinson’s disease.

Although migraine is not normally considered an inflammatory disease, there are several studies that show a link between the two (5) ( 6)

This study looked at the evidence that keto diets could be used to reduce pain and inflammation.

It’s already well-known the keto diet can manage epilepsy. The  excitability of neurons is involved in not just epilepsy, but also in pain.

For this reason, anti convulsant drugs can sometimes be used with a positive outcome for chronic pain.

As ketosis helps reduce epilepsy, it was suggested that the same may be true for pain.

This study had already demonstrated the usefulness of fasting for the reduction of pain.

Obviously, as the keto diet and fasting both produce ketones, this is more evidence for the usefulness of the keto diet in the management of migraine. 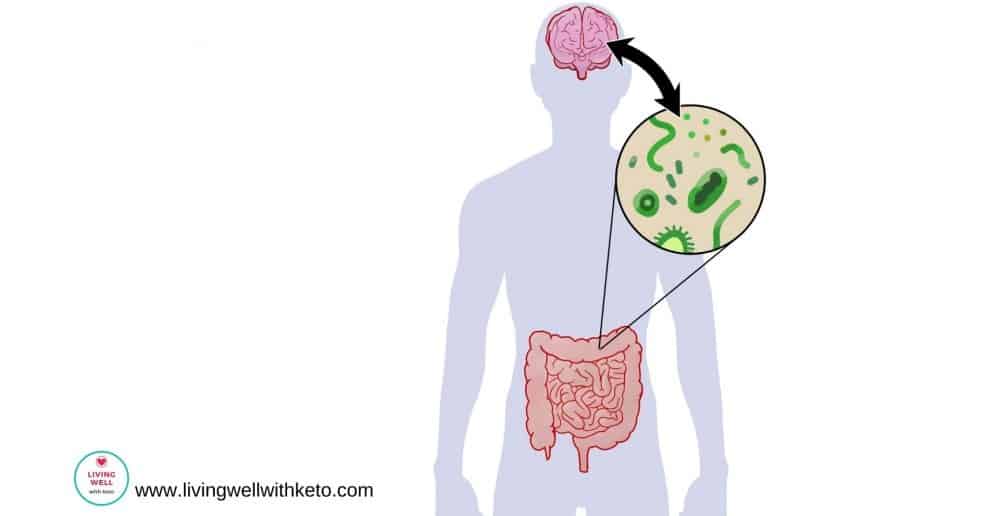 Although poorly understood at this time, there is evidence that an imbalance of gut microbes plays a part in the development of migraine.

The keto diet is known to positively affect the balance of microbes in the gut.

This is due to it’s restriction on carbohydrates, especially simple carbs such as sugar.

There is some evidence that by balancing the gut microbes, there is less risk of suffering a migraine.

For more information about the keto diet and gut microbes see this article.

Excitability of the brain and migraine

Excitability in the brain has two main causes:

When there is an imbalance, excitability will occur, and this can lead to migraines. This is one of the same pathways in the development of epilepsy.

There seems to be an overlap between the two conditions, and both are often influenced by genetics.

When the body is producing ketones, there is an increase in the GABA/Glutamate balance.

This leads to a general calming of the brain, and a reduction in the frequency of migraine.

For many years, people have chosen to follow the keto diet for health or weight loss reasons.

Many have been surprised and pleased by an unexpected side effect of being in ketosis: a reduction in severity or frequency of their migraine attacks.

This anecdotal evidence has been around for some time.

However, now  there are now some serious scientific studies that have shown that being in ketosis can have a positive impact on the amount of migraines someone may experience.

The keto diet is well-known as a method of dealing with drug resistant epilepsy.

Further,  there appears to be an overlap in the conditions of epilepsy and migraine. They share some of the same neurological pathways.

Studies have shown that in migraine sufferers, there is a lowered ability to utilize glucose of immediate energy needs.

This low availability of glucose is associated with migraine.

Once someone following the keto diet enters ketosis, the brain is able to make up for this by switching to its second metabolic pathway.

That is, the body switches over  to using ketones for energy in place of glucose.

This appears to be of benefit to the suffers of migraine.

Ketosis also stabilizes blood/glucose levels, and in doing so, minimized the times that someone may experience hypoglycemia.

Hypoglycemia is a common trigger for migraine.

Many sufferers have long noticed that they will have a migraine if they miss a meal, even if only by a few hours.

The keto diet can also have a beneficial effect on the balance of healthy gut microbes.

Again, this can reduce the amount of migraines in some individuals.

Together with the evidence of calming the brain, it would seem that there is some solid science behind the idea that the keto diet is beneficial for the sufferers of migraine.

Migraine is a complicated disease, and it’s possible that there is more than one cause and possibly more than one remedy for the condition.

However, with the evidence that is already here, it would seem that on the balance of probability, it would be well worth your time to experiment with the keto diet and see if you are helped.

Migraine is both debilitating and chronic, and the keto diet could make a dramatic difference to your health and your life.

How does a keto diet work?

How many carbohydrates do you need everyday?

What is inflammation in the body?

Don’t guess what you’re eating: weigh and track your macros

The keto diet is an amazing diet loved for its weight loss and health benefits. However, a common side effect can be keto bad breath. […]

The keto diet is an amazingly effective weight loss tool. It will also help you to improve your health both now and in the future. […]

The keto diet offers many healthy choices when it comes to the best keto breakfast foods. With the emphasis on high fat, medium protein and […]

The keto diet is a fast and efficient way of losing weight. When you combine intermittent fasting with keto diet, you will be super charging […]

Are you looking for a natural way to treat type 2 diabetes; a reversal of diabetes without medication? This guide will show you how to […]

We recently reviewed the best sweetener for keto.  There are many people who want to know more about High fructose corn syrup and the dangers […]

Most people are aware that sugar at 100% carbohydrate is off the menu when it comes to the keto diet. For this reason, you’ll be […]

The keto diet continues to gain popularity and more than ever people are seeking to optimize their health. With all this interest, many are looking […]

A natural treatment for asthma: Keto (ketogenic) diets can offer a natural way of reducing chronic inflammation . This inflammation of the airways is […]

It’s no surprise that people are looking to boost their immune systems. Now more than ever, the importance of having a healthy immune system is […]

If you’re interested in keeping your immune system in great shape, you will know that fermented foods make a great choice. The Health Benefits of […]

We’re all facing one of mankind’s biggest challenges. Every one of us needs to maintain our optimal heath in the face of this corona virus […]

If you’re experiencing some issues with your new keto diet, Problems with the keto diet (quick guide) will soon have you back on the healthy […]

Can you complete a 72-hour fast for an immune system reset? The science says you can. There is a lot of evidence that says fasts […]