Reasons Why Seed Oils Are Bad For Your Health. 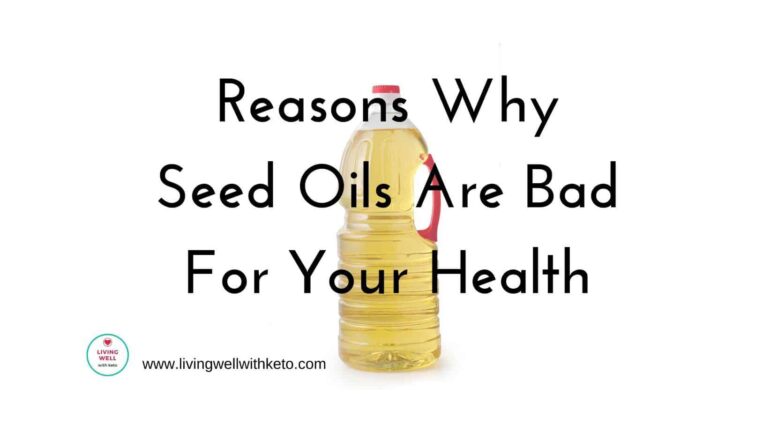 Discover the Reasons Why Seed Oils Are Bad For Your Health and should never be used.

Further, you’ll be doing your health a good turn if you include only healthy fats in your diet.

If you’re following a low carb or keto diet  this is especially important, as your fat consumption will be high.

The keto diet requires that at least 70% of your daily intake comes from fat.

What is sometimes misunderstood it that these fats need to be healthy fats.

It’s not a case of any fat being OK and here we are going to discuss the reasons why seed oils are bad for your health and should not be eaten.

In order to gain the maximum health benefits from the keto diet it’s important to make sure that all the fats you consume are healthy and natural.

These fats are the traditional fats that have been used for centuries, long before the current upswing in the numbers of people suffering from a long list of inflammation triggered chronic diseases. 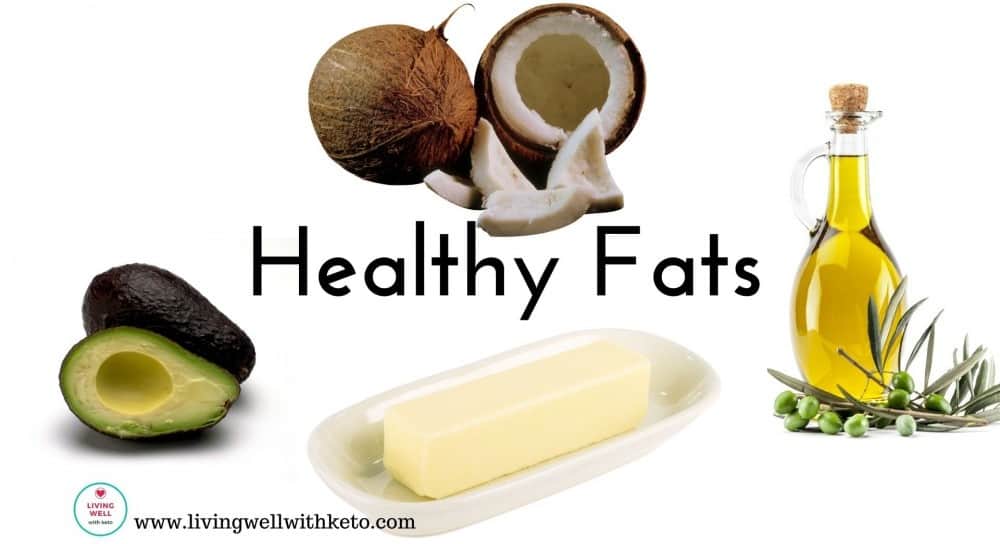 There’s a wide choice when it comes to healthy fats. What’s  striking is that many of these fats have been used by humans for millennia.

It would be safe to assume that these are the types of fats to which we are accustomed. For this reason we’re  able to process without harm.

These are natural fats and deliver fatty acids that work well with our physiology. These fats will also enhance our health:

Adding these fats to your food will help you reach your macros. They will also help you to feel full for longer, and are a healthy addition to your diet.

Unfortunately, not all fats are created equal.

Seed oils are not the same thing at all.

What are seed oils?

Seed oils are industrial man made oils that have only been available since the beginning of the 20th century.

There is nothing natural about these oils and are highly processed in order to be used as “food”.

They are processed from soybeans, corn, rapeseed, safflower seeds and cotton seeds. The end result are these oils:

Cottonseed was used extensively for soap until the process of hydrogenation, which solidified the oil at room temperature.

Proctor and Gamblewere one of the main soap producers of the time. When they  discovered how to solidify this oil, they quickly saw an enormous marketing opportunity.

They learned to change cottonseed oil into Crisco.

Reasons Why Seed Oils Are Bad For Your Health.

The fat of choice at the time was natural animal fat or lard. This was the most commonly used fat. Every family saved and used animal fats as part of their normal food preparation.

Proctor and Gamble realized that the hardened cottonseed oil looked a lot like lard, which was a familiar food item for most families.

They called their new product Crisco, and cottonseed moved on from being industrial waste to ” food”.

This was accomplished due to a perfect storm of conditions in the early 20th century:

Many families were poor, and were seeking cheaper foods to feed the family.

Marketing ads were unregulated, and the new fat could be sold as “healthy” and “healthier than animal fats”. All without a shred of hard science to back the claim.

After the biggest advertising campaign of its time, Proctor and Gamble had convinced a staggering amount of American families to buy the new product. They sold 69 million pounds of Crisco within four years.

Soon other seed oils were flooding into the market, and soy oil became the best-seller by the 1950s. Canola and Corn oils were not too far behind.

Suddenly everyone was eating a product that had not existed as a food for more than a few years. The journey of these oils from toxic waste to food was complete.

It was not until the 1990s that the health hazards of these seed oils began to be known.

How are seed oils manufactured ?

Seed oils need to go through a massive amount of processing in order to become edible. This industrial process includes refining, bleaching, deodorizing and coloring.

They must be super heated which triggers oxidation and then soaked in Hexane which is an industrial petroleum based solvent.

This maximizes the amount of oil that can be extracted which then needs to be deodorized to hide the off-putting smell. The deodorizing process produces the trans fat, now widely known to be a health risk.

Finally, the product is then colored with more chemicals to make it resemble butter or lard. The solid cottonseed oil is now an oxidized trans fat complete with the residue of various chemicals.

When the process is laid out in this way, it’s hard to see why anyone would still feel that these fats are not harmful to human health.

How were people convinced to swap butter and lard for these new seed (aka vegetable) oils?

The companies that were producing these new oils were also investing massive amounts of money in some of the largest advertising campaigns of the time.

They were also some of the few manufactures to think of offering free gifts in exchange for purchasing their product. Proctor and Gamble offered a free recipe book, where all the recipes called for the use of their product – Crisco.

At the same time, the relatively small American Heart Association turned its attention to these new products.

In their early days, The American Heart Association received a very generous amount of money, $1.5 million in the 1940s was a huge grant. This allowed the Association to expand and increase its influence.

The money came from Proctor and Gamble, makers of Crisco.

At the same time the scientist Ancel Keys presented his “evidence” of a link between saturated fat and heart disease.

His “Seven Countries” study is now widely discredited, and he has been accused of cherry picking the countries that he studied, choosing those who appeared to support his hypothesis.

This is where he presented data that seemed to suggest a link between saturated fat and cholesterol intake and heart disease.

Further, this sat nicely with the seed oil manufactures.

Within a very short time, most of the population had swapped butter and lard for the new “healthy” oils and margarines.

Ancel Keys´ theory was taken up by the AMA, who now had another reason to push the idea that saturated fats caused heart disease.

In 1961, the AHA issued the first ever guidelines that demonized saturated fats.

Before long, even governments were issuing diet guidelines that suggested that saturated fats should be avoided.

They stated that everyone should be using seed oils as the healthier alternative.

All without any proper scientific evidence that this war against saturated fats was in fact true.

What do seed oils do to your health? 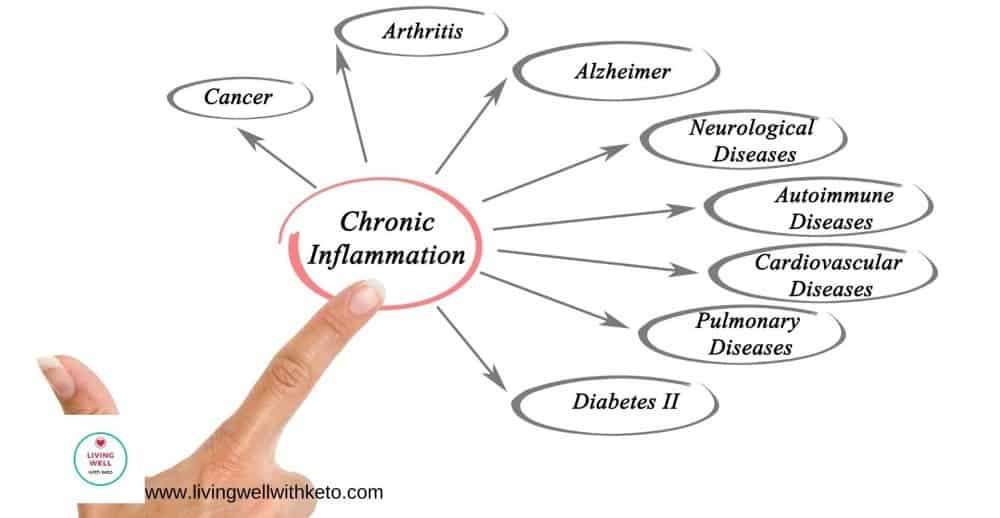 These seed oils are very unstable, and release some very damaging chemicals. Some of which are known to cause cancer among many other diseases, as demonstrated in this study.

These seeds oils are used for frying, but at temperatures of 180 c/ 256 f they release toxic compounds which are implicated in the development of cancer.

Worse, with each re heating, the concentration of these chemicals is increased.

This shocking study found that Chinese women in Singapore, who did not smoke, had high levels of lung cancer.

They discovered a link between the fact that they fried food in a wok full of canola oil daily. They suggested much better ventilation when frying with seed oils.

I suggest never using these oils at all.

Seed oils also contain high levels of omega 6 fatty acids. These omega 6 fats trigger the body’s inflammatory responses, as well as reducing the ability to uptake omega 3 which is an anti inflammatory.

Inflammation in the body has been linked to many (if not all) serious diseases.

The oils that you should avoid due to their high omega-6 content include:

How to avoid seed oils

Obviously, don’t by margarine, or bottles of seed oil especially if you plan on heating it.

However, avoiding seed oils completely is not as easy as that. These oils are cheap and heavily used in the food industry.

Seed oils are everywhere. For example:

To avoid these oils, you’ll need to become a fan of reading the ingredient labels on just about any food that you buy.

The alternative is to base your diet on “real” food. That means buying and eating foods that are still in their natural state.

There is a mountain of evidence that says seed oils are not good for your health. They are heavily processed, and contain many harmful compounds that can cause multiple diseases.

They are unstable, and release toxic chemicals when they are heated.

Moreover,  these oils are often heated over and over again in restaurants and take away food stores.

There was no science to back the claim that seed oils were healthy, or more healthy than the saturated fats that we were all told to stop using.

There is ongoing and increasing amounts of science that is saying that the war on saturated fats was wrong.

Where possible, base your diet on fresh fish, meats, vegetables and some fruits. Add in nuts and eggs, preferably free-range.

Always buy the most expensive food you can afford, and fall back in love with butter, tallow, lard, olive oil or coconut oil.

It’s not saturated fats that are making us ill. We’ve been eating those since the beginning of time.

The huge increase in diseases of every kind has only happened in the past fifty years. There are many causes including the amount of sugar we now eat.

Plus the ever-increasing amounts of seed oils now consumed, something we didn’t eat at all a century ago.

Previous
How To Stop Food Addiction (with the keto diet)

Next
Fat Adapted On Keto: How To Burn Fat Fast