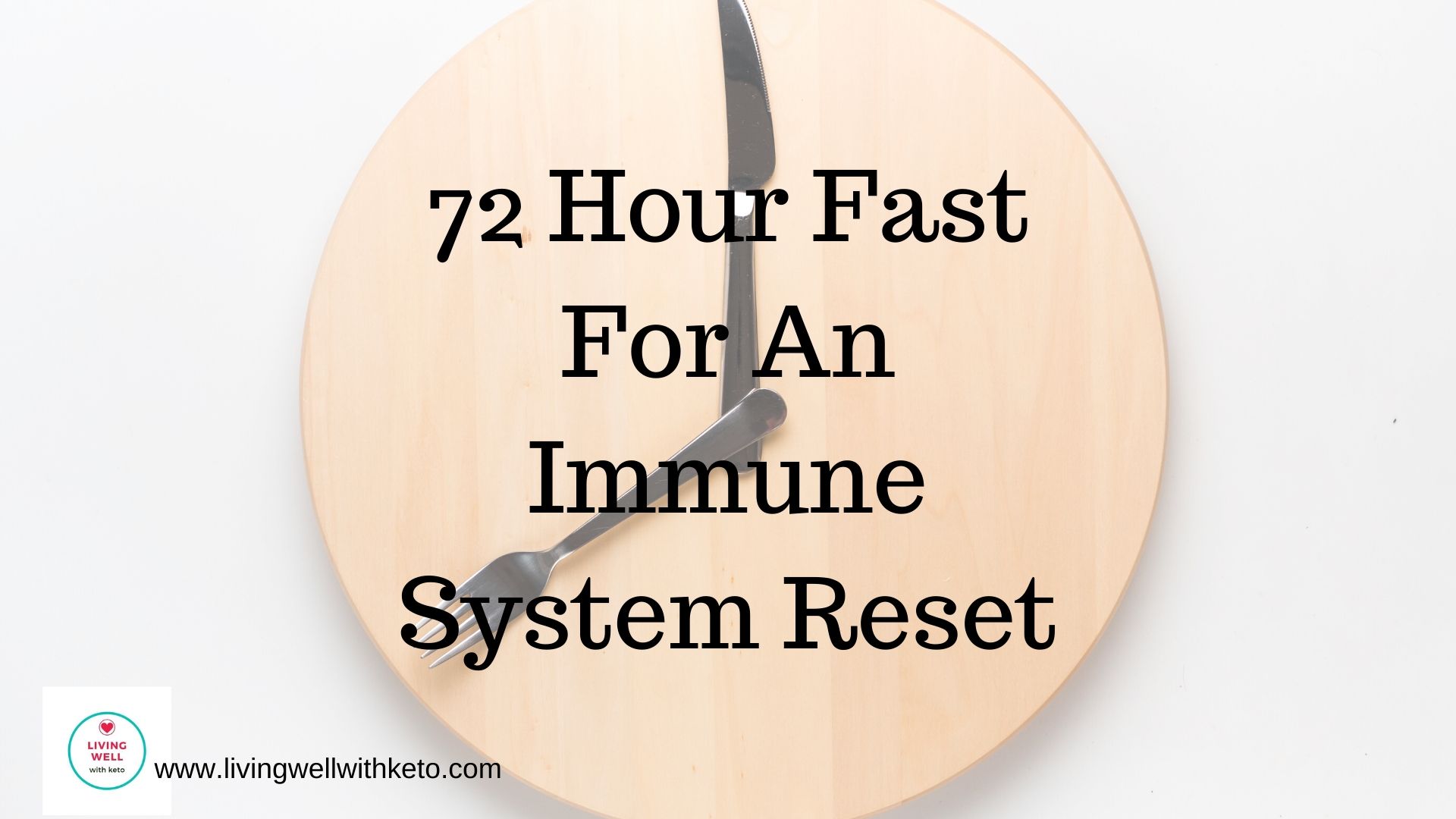 Can you complete a 72-hour fast for an immune system reset? The science says you can.

There is a lot of evidence that says fasts of any length are good for you. You will trigger that uber healthy state of autophagy.

However, the 72-hour fast seems to be the sweet point for an immune system reset that’s super healthy.

Scientists at the University Of California discovered that fasting for 72 hours can have amazing health benefits.

In particular it acted upon white blood cells, vital for immunity.

These cells, especially those which were damaged, were cleared from the body along with toxins.

For any of us interested in health and longevity, this is good news as Immune system defects are at the center of aging and a range of diseases.

Professor Valter Longo, is the Director of the Longevity Institute at the University of Southern California.

He is a world renowned cell biologist known for his studies on the role of fasting.

He is an expert on nutrient response genes. In particular, their action on cellular protection, aging and diseases (1)

Prof.Longo noted that during a fast, the white cell count dropped quickly.

Once the fast ended, and refeeding began, the white blood cell count rapidly climbed. This caused Prof. Longo to wonder where the new cells came from.

Further, he found that:

“The physiological changes caused by PF are much more pronounced than those caused by calorie restriction or overnight fast”.

There is no doubt and overwhelming evidence that fasting is super healthy.

Fasting has been well researched and the results prove that it has multiple health benefits.

When you take a break from food the body is triggered into flicking the switch on stem cells. This causes them to ramp up the production of new white blood cells.

These are the important cells that fight off infection. With new healthy white blood cells, your immune system will be working at its best.

With the immune system renewed, we are going to maximize our chances of living not just a long life, but a healthy life too.

Why fast for 72 hours and not less?

Various cool and healthy things happen to your body when you fast, but at different rates.

A fast as short as 12 hours will get you using your glycogen stores. You probably won’t be in ketosis at this stage. Most people have enough glycogen stored to run on zero food for longer than 12 hours.

Therefore, unless you’ve been very low carb before your fast, 12 hours is good for you, but ketosis is not guaranteed.

This study found that there is a point of negative energy balance at which liver glycogen stores are depleted. At this time, fatty acids are mobilized.

This is the point at which ketosis starts and it is typically beyond 12 hours after the start of the fast.

Between 12 and 24 hours is when the real business of ketone production takes off.

At this stage, most people will have burned through their glycogen stores. The body will have switched over to burning fat for fuel.

At 48 hours, this study found that the first response to food restriction which was observed at 24 hours, was a significant increase in the number of autophagosomes.

The presence of these indicates that autophagy is well under way.

This is because it is autophagosomes which fuse with or digest cellular constituents during autophagy.

This process can be seen at 24 hours without food, but was magnified after 48 hours of fasting.

A few hours later, at 54 hours and the benefits of fasting are even stronger. Your insulin levels will have fallen to their lowest level since you started fasting.

72 hours fast will give you all the benefits

It’s been found that at 72 hours, you’ll be really reaping all the benefits that fasting and autophagy can bring.

Once you have fasted for 72 hours you will be feeling the all cognitive benefits. You will have more focus and will be able to think clearly.

This would have served you well in the days when humans regularly faced a lack of food.

At a time you needed to hunt for more food, you would have needed to be calm and thinking clearly. Focus would have been required if you were to  find your next meal.

Importantly, at 72 hours you have been fasting long enough for a breakdown of old or damaged immune cells. This leads to the  regeneration of new ones.

Your entire immune system can be reset, with multiple health benefits.

Prolonged fasting up to 72 hours promotes growth in almost all cells.

This study showed that a long fast of 72 hours was able to protect cancer patients against toxicity, when done immediately before they began chemotherapy.

How many times do you need to do a 72-hour fast?

There needs to be more research about how often you need to do a 72-hour fast to optimize your health.

However, several scientists including Prof Longo have suggested you needn’t do this too often. There seems to be no need to do a fast of this length more often than two or three times a year.

There are many fans that do embark on this fast much more often. Keto dieters often do a 72-hour fast each month or so.

However, it’s important to remember that too much autophagy can be damaging, so more is not better when it comes to fasting.

It’s also necessary to take into account your weight, fat percentage and health. Some people can tolerate a 72-hour fast more easily than others.

People who are fully fat adapted on keto are able to fast much easier than most.

This is due to the fact that their bodies are able to quickly move to using stored body fat for fuel.

Most people find fasting easier if they eat a low carb diet for a few days before completely stopping all meals.

Fasting for any time will give your health a great boost. The health benefits of autophagy cannot be overestimated.

If you are wanting to give your health a boost, there is no better and more researched way to achieve this: take a break from eating and renew and recharge your entire body.

However, if you are interested in boosting your immune system there is no doubt that a 72-Hour Fast For An Immune System Reset is the way to go.

This has been well studied, and there is no evidence that a fast of this length is dangerous.

While on the fast you’ll drink only water or black tea/coffee.

You will need to make sure your electrolytes are kept in balance.

This is a problem also often encountered by new keto dieters known as the keto flu.

This article explains what the keto flu is, and how to avoid it. You’ll need to familiarize yourself with this, as it can also be an issue in the early stages of a fast.

So, the message is clear: prepare by eating low carb for a few days. When you start your 72-hour fast watch out the keto flu, which is a sign your electrolytes are out of balance.

Eat nothing and drink only water or black tea/coffee.

If you don’t have any health issues, its OK to carry on with your normal routine. However, you may want to give heavy gym sessions a miss.

Those with health issues should seek the advice of their medical provider first.

Repeat this fast every few months, but don’t over do fasting as it can become damaging if done too often.

With some preparation and good sense, a 72-hour fast is one of the best things you can do for your immune system and your health.

12 thoughts on “72 Hour Fast For An Immune System Reset”

Disclaimer: The content of this site is not intended to be a substitute for professional medical advice, diagnosis, or treatment. It is not a substitute for a medical exam, nor does it replace the need for services or counsel provided by medical professionals.
livingwellwithketo.com is a participant in the Amazon Services LLC Associates Program, an affiliate advertising program designed to provide a means for website owners to earn advertising fees by advertising and linking to Amazon(.com, .co.uk, .ca etc) and any other website that may be affiliated with Amazon Service LLC Associates Program.
Affiliate Disclosure: When you buy something from this website, I may receive an affiliate commission. My reviews are based on my OWN personal experience and research. These are my opinions and are not representative of the companies that create these products. I never recommend poor quality products, or create false reviews to make sales. It is my intention to explain products so you can make informed decisions on which ones suit your needs best.